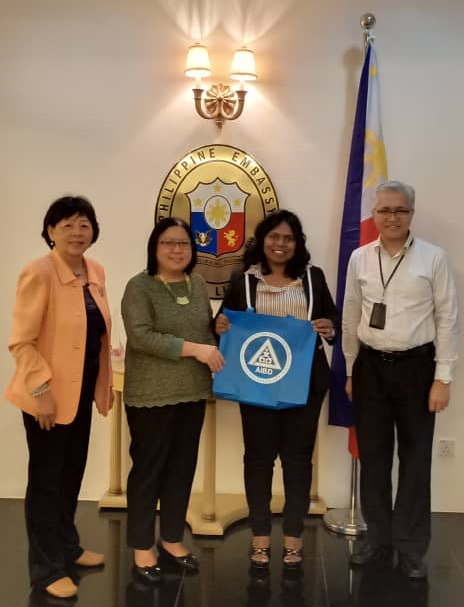 The Director of AIBD, Ms Philomena Gnanapragasam was warmly received by the Deputy Chief of Mission and Consul General, Anne Jalando-on Louis and First Secretary and Consul, Mr Ruel U. Gunabe during a courtesy call at the Embassy of the Republic of the Philippines in Kuala Lumpur.

The courtesy call had a fruitful discussion in fostering closer-ties to carry out various media development training activities between AIBD and the broadcasting organization of the Philippines.

Among the key areas of discussion included the proposed Asia-Pacific Information Ministers` Conclave to be held in Samoa next year.  Ms Philomena added that, AIBD is taking the lead in the field of media development on fake news by conducting workshop activities with AIBD members in the Asia-Pacific region.

She disclosed that the ‘Angkor Anti-Fake News’ Initiative spearheaded by the Cambodian Ministry of Information (MOI) was launched during the AIBD’s Annual General Conference (GC) in Bhutan recently.  With the help of UNESCO, AIBD has embarked on a year-long research project with two universities in Malaysia.  The outcome of the research with input from our member countries will be compiled and produced a “Blue Print” document.

Ms Anne remarked that it is crucial for AIBD as an inter-governmental organization to work with the respective government authorities on how to address the current trend on the “fake news” issues.